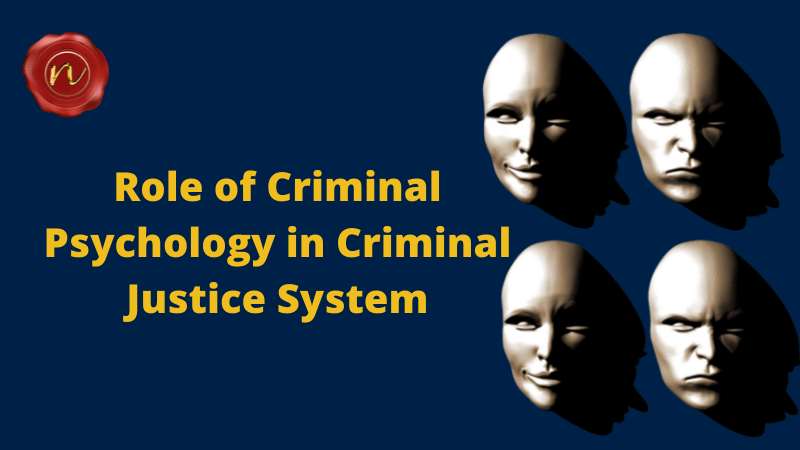 What is criminal psychology?

Criminal psychology as an academic discipline was established recently in the 19th century as one method of criminal investigation. The term criminal psychology is first used by “Hugo Munsterberg”. This is the study of the views, thoughts, intentions, actions, and reactions of criminals and their criminal behavior. This plays a crucial role in our Criminal Justice System to understand the psychological motivations that occur behind any crime. The major roles include determining the criminal’s reason for committing the offense, interviewing and interrogating criminals, assessing the crime scene, evidence, offense,s and their roles in the crime, and creating a profile to help law enforcement after the commission of a crime. It also helps to evaluate the thought and state of mind of the criminal [1]. In India, the first department for experimental psychology was established at Calcutta University in 1916. After which Lok Nayak Jayaprakash Narayan National Institute of Criminology and Forensic Science in Delhi in 1972. Then in 2001, it achieved global recognition as a specialized field by A.P.A. According to G.H. Gudjonsson and L.R.C Haward in the U.K. defined criminal psychology is the branch of applied psychology that is concerned with the collection, examination, and presentation of evidence for judicial purposes. According to the legal dictionary, criminal psychology is considered the study of the will, intention, thoughts, feelings, and reactions of criminals and those who engage in criminal behavior [2]. It implies behavioral and mental health professionals whose findings are used to make judicial determinations. Criminal psychology also helps to assist police in the investigation, advises on interviewing suspects and witnesses, and also works for the rehabilitation process.

What do criminal psychologists do?

Studying criminal psychology can be both challenging and rewarding. It requires a solid understanding of a variety of topics, including psychology, law, criminal justice, and sociology. It can be difficult to stay up to date on the latest research and theories in the field, but it can also be an incredibly rewarding experience. Ultimately, it’s up to you to decide if criminal psychology is the right field for you.

Is criminal psychology the same as criminology?

Why is criminal psychology important?

Criminal psychology is an important field to understand due to its critical implications for public safety, justice, and rehabilitation of offenders. Criminal psychologists use their unique knowledge of human behavior to study why people commit crimes, how to prevent them, and how to best treat those who do. Through their research and expertise, criminal psychologists can help inform policies and practices that promote public safety and justice. Additionally, their understanding of how behavior is shaped by environmental and psychological factors can be used to develop approaches to rehabilitation that are tailored to the individual needs of offenders. Criminal psychology is a crucial topic that can aid in our understanding of the causes, effects, and best ways to deal with crime.

This includes an assessment of an individual in order to provide clinical judgment by using psychometric tests and interviews. This is applicable to assess the mental illness of the person or offender in relation to a particular crime.

The psychologist performs the task in order to investigate the case. It involves experimental tests for the purpose of providing information to courts. For e.g.: “How witness saw the event”?

This role involves the use of statistical techniques in order to inform a case. For e.g.: to inform the probability of an event.

The psychologist advises the police about how to start an investigation. For e.g.: cross-examination, witness examination, and how the offender will act after committing the offense [3].

Criminal profiling also known as offender profiling is the process of linking an offender’s action at the crime scene. It is an investigative plan used by law enforcement agencies to identify likely suspects and has been used by investigators to link the cases that may have been committed by the same offender [4].

According to Professor Laurence Alison, “It is important to appreciate that the ways in which criminal psychologists can contribute extends well beyond the process of profiling offenders. Indeed, the apprehension of the offender would be assisted by enhancing police decision-making and leadership skills, improving methods of interviewing witnesses and victims, developing accurate methods of recording, collating, and analyzing data on pre-conviction of offenders, developing suspect prioritization system based on empirical research and enhancing intelligence-led policing and the use of information.”

This is one of the most important tasks during the investigation to collect reliable evidence. Psychologists have been instrumental in developing guidance and advice on how best to interview witnesses and suspects and have also provided training to various police forces on these techniques. The police can also use psychologists in order to gain advice on how to interview particular types of witnesses or suspects. In criminal psychology, a criminal psychologist can be present as an expert witness.

D.  Assessment and treatment of offenders:

It involves the work concerned with assessing, rehabilitating, and managing offenders, either in the community or in incarceration. It helps in re-offending in the future. There is a need to find out the reason for the commission of a crime, in which situation or environment within which they are held. Here they can provide input to each of these arrangements on an operational level but can also provide managerial and advisory support to those delivering such interventions [5] [6].

An understanding of the criminal mind is one of the most useful tools in solving crimes, which becomes apparent in these five famous cases cracked by criminal psychologists. Although techniques are becoming more sophisticated yearly, criminal psychology has a long and storied history.

A psychologist could spend a lifetime examining the twisted mind of Ted Bundy, one of America’s most notorious and charismatic killers. Luckily, several criminal psychologists used their expertise to crack this famous case. Over time, Ted Bundy’s brutal attacks and killings became less careful and more frequent. Their psychological profile, which benefited greatly from a former girlfriend’s information, eventually ended the nationwide manhunt for Bundy and even linked him to other unsolved murders.

Although complaints and suspicions from neighbors were ultimately what ended “killer clown” John Wayne Gacy’s shocking killing spree, forensic psychologists ensured that the culprit in this famous case didn’t go free on a bogus insanity plea. Through a series of interviews, psychologists on the case were able to determine that Gacy’s murders involved premeditation and a detailed plan to hide his victims’ bodies. Without criminal psychologists’ assistance, in this case, traumatized families may have never experienced the satisfaction of seeing Gacy punished for his crimes.

An ongoing series of bombings at New York City’s famed Radio City Music Hall is an intriguing case that’s often forgotten these days. This case, which involved more than a dozen explosions between 1940 and 1950, proved so problematic for police that it was one of the inspirations for the development of the Federal Bureau of Investigation. Psychologist James Brussel was able to determine that due to the intricacy and knowledge of the explosive devices, the bomber was almost definitely an engineer, most likely at Con Edison. This profile directed the police toward George Metesky. The remarkable accuracy and efficacy of the forensic psychologist’s profile increased the demand for these experts across the nation.

The case of serial killer Aileen Wuornos, who you might know as the inspiration for Charlize Theron’s mesmerizing performance in “Monster,” may have never been solved

without a famous use of criminal psychology. Psychologists were able to determine a consistent motivation for Wuorno’s killings–her intense fear of losing her relationship with her long-time partner Tyria Moore. This profile proved to be incredibly accurate when each of Wuornos’s killings was later linked to rocky periods and short-term separations between the lovers.

Andrei Chikatilo’s reign of terror had Russian police mystified for more than two decades until it became one of these famous cases cracked by forensic psychologists. To date, Chikatilo has been linked with the murders of 53 Russian women and children. Growing frustrated with the lack of promising leads, Viktor Burakov, the case’s chief investigator decided to employ a new method. He enlisted Dr. Alexander Bukhanovsky’s help in compiling a psychological profile for the killer. This information proved invaluable in narrowing down their list of suspects to Chikatilo himself, who confessed to his horrific crimes in 1990.

Criminal psychology is the study of the thoughts and behavior of criminals. It answers why, what, and how they commit offenses. We have learned the emergence of criminal psychology and also the roles and responsibilities of a criminal psychologist in dealing with the offender in the Criminal Justice System. It comes to the conclusion that the roles include aiding the police in their investigations advising in the selection of police officers, providing expert evidence to the court, working with offenders, conducting assessments and interventions, carrying out research, or imparting their knowledge to future Forensic Psychologists, the functions are varied and challenging. Criminal psychology reviews research and data in determining the psychological aspects of criminals.