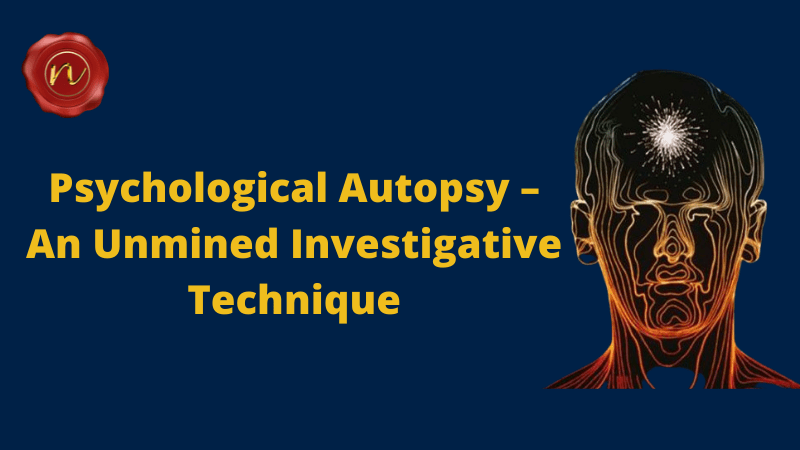 Investigative techniques are continuously upgraded as per the requirement of crimes. Some of the conventional investigative techniques like 3degree interrogation are to an extent eliminated and more emphasis is given to the use of psychological investigative approaches. Psychological autopsy is one of the approaches adopted when physical autopsy fails to give the actual manner or cause of death.  According to conventional NASH classification, the manner of death can be Natural, Accidental, Suicide, or Homicide. However, at times it will be difficult to distinguish, thus in such “equivocal deaths” (manner of death is uncertain or immediately not clear), psychological autopsy is conducted along with physical autopsy.

A psychological autopsy can be defined as “A post-mortem investigative procedure requiring the identification and assessment of suicide risk factors present at the time of death, with the goal of enabling a determination of the manner of death to as high a degree of certainty as possible.” Or in the simpler form, it refers to the mental state of the person prior to his/her death. The concept was developed around 1958 as a result of the collaboration of Los Angeles County Medical Examiner’s Office to Los Angeles Suicide Prevention Center in distinguishing drug-related accidental overdoses from suicides. It resulted in the formation of the basic procedural principle of psychological autopsy and the director of LA Suicide Prevention Center, Edwin S. Shneidman coined the term “Psychological Autopsy”.

He defined it as “A behavioral scientific, impartial investigation of the psychological (motivational, intentional) aspects of particular death. It legitimately interviews (with a variety of people who knew the decedent) and examines personal documents (suicidal notes, diaries, and letters) and other materials (including autopsy and police reports) that are relevant to the role in the individual’s death”. He further proposed 14 areas of inquiry for preparing psychological autopsy, these include:

Thus, PA involves a retrospective construction of all relevant information related to the deceased with a particular focus on suicide thoughts, intension, and motives. All applicable records, including medical records, psychiatric records, police records, decedents’ diaries, journals, emails, even internet correspondents are reviewed. Structured interviews with family members, relatives, and friends are also collected. Researches indicate that a greater amount of data results in a more accurate conclusion.

The purpose of psychological autopsy is not restricted to determine the manner of death. It also includes to find out why the deceased chose this particular time, date and place (for e.g. Was the date anniversary of their loved one’s death, where the place once part of their routine, etc.), motivation of death- this incorporates intentional (committed suicide on purpose), sub- intentional (suicidal act was done only to harm, not to kill) and unintentional. PA is also performed in some cases for the clarification of victim’s family as on what happed, actually.

PA is applied for both civil and criminal litigations. In criminal court, PA is applied to deduce manner of death and suicide or homicide whereas, in civil litigation, it is used for insurance claims of the beneficiary of the deceased. Other applications include:

Even though PA may uncover new facts about the case, it does have certain limitations. The lack of a standardized method to measure the respondent’s reactions often yield unreliable assessments and invalid opinions. Successful collateral records are often impossible as the third party’s recollections of the mental state of the victim’s decline as time proceeds. As PA associated more with recall bias, there is a tendency to remember the positive attributes of the victim and to overlook negative attributes. Sometimes, the information provided by a third party on the mental state of the victim may be distorted purposely or unconsciously.

Thus, it is the need of the hour to standardize psychological autopsy procedure.

In India, Psychological autopsies are applied during the investigation, whenever a conflict or controversy arises between investigating agency and family of deceased, former claiming to be suicide and later claim it to be a homicide. Psychological autopsy came to limelight with high-profile case like Sunanda Pushkar case and burari death. The later, refers to the deaths of eleven family members of the Chundawat family from Burari India, in 2018. Ten family members were found hanging dead, while the oldest family member, the grandmother, was strangled. The deaths initially suspected to be a case of murder because of tied limbs, blindfolds, gagged mouths, and baffled. Later on, the investigators discovered 11 diaries that were maintained for a period of 11 years, and the family hanged themselves in the same manner which was mentioned in the diaries found from their house. Thus, from a psychological autopsy, it was clear that it was not mass suicide, they were an ‘accidental mass death’ during a ritual for salvation and it was concluded that the entire family suffered from shared psychosis.

In India, all forensic reports are admissible in court as per section 45 of IEA. However, the lack of a standardised method for Psychological Autopsy is a concern

Psychological autopsy is a promising investigative technique that may uncover facts that were not determined by physical autopsy. The assessment of the mental state of the deceased will reveal an insight into behavior, mental disorders, and possible stressors. The psychological autopsy can reveal answers to unsolved cases thus it is the need of the hour standardize and use it widely.