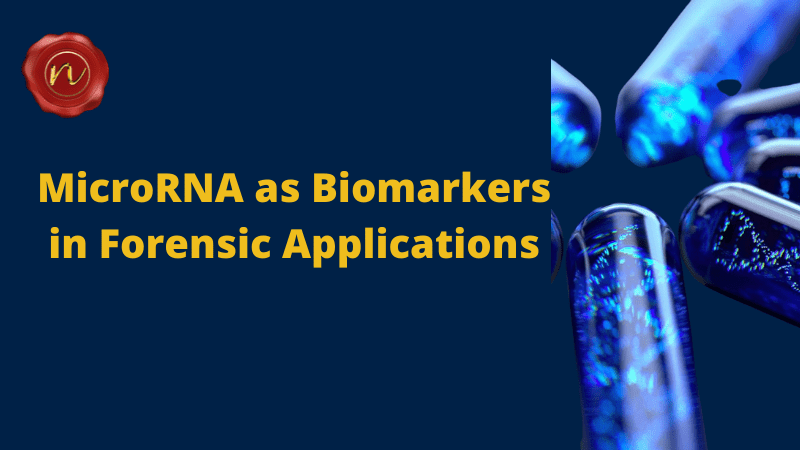 MicroRNA (miRNA) analysis has been the focus of many researcher’s attention in the biomedical field since its discovery in 1993; however, the forensic application of miRNA analysis has only been suggested within the last 10 years and has been gaining considerable traction recently. MicroRNAs (miRNAs) are a class of small, endogenous, non-protein-coding RNA molecules of approximately 22 nucleotides in length, and exist extensively in a variety of eukaryotic cells.

MiRNAs regulate gene expression and play fundamental roles in multiple biological processes, including cell differentiation, proliferation, and apoptosis as well as aging and disease processes. MiRNAs have been shown to have high tissue specificity, resistance to degradation as a result of their small size and storage in the exosomes. They have no splicing variants unlike mRNA and their expression also follows a cell-specific pattern. Thus, they have great advantages for identifying forensically relevant body fluids.

Actually, recent studies have reported that several microRNAs are highly expressed in forensically relevant body fluids and can roughly distinguish semen, blood, saliva, and vaginal secretion. Body fluid identification is crucial in forensic casework for the reconstruction of the criminal activity. It may indicate how the sample was left at the crime scene.

For example, saliva may have been deposited by chatting while semen may be attributable to sexual assault. The personal identification is also useful for distinguishing the twins. Monozygotic twins are widely regarded as genetically identical, and traditional DNA typing methods are insufficient in identifying MZ twins. So, the discrimination of MZ twins becomes a forensic problem.

The studies’ results demonstrated that there are differences in the expression of miRNAs within MZ twin pairs, suggesting a role of miRNAs in identifying MZ twins. Similar to body fluid identification, the identification of certain internal organ tissues can be useful in the investigation of a violent crime. During a violent act, internal organ tissue may be transferred from the victim to the perpetrator, or to the weapon or innocuous item present, or to the location/scene at which the crime is being committed. Internal organ tissues may adhere to a bullet passing through a body, or to a knife

that has penetrated the skin. As miRNAs have shown great promise for body fluid identification, it is logical to infer that the same potential to their use for organ tissue identification, such as the brain, kidney, liver, lung, skin, heart muscle, and skeletal muscle. Anyway, further research into this novel application of miRNAs should be done.

There are, however, other forensic applications of miRNA profiling that have shown potential, yet are largely understudied, and warrant further investigation such as, donor age estimation, and more. Recent studies have focused on the application of DNA methylation for chronological age determination in the field of forensic genetics.

However, the amount of DNA and the complex bisulfite conversion process make applying this method in trace or degraded samples difficult. Human aging is an area of great interest, in particular with regards to identifying diagnostic predictors of age-associated diseases, such as cancer.

There is potential to translate the findings of biomedical research studies to forensic applications for estimating the age of a donor of a particular biological sample using miRNA analysis, especially for body fluids or stains at crime scenes. Recent developments in massively parallel sequencing (MPS) technology provide the opportunity to establish a whole-genome miRNA profile with high throughput and efficiency. Studies’ results demonstrated that the majority of miRNAs decreased in abundance with age. Anyway, the forensic application of microRNA analysis is only just being realized. As a result, published research in this area is limited, yet growing.