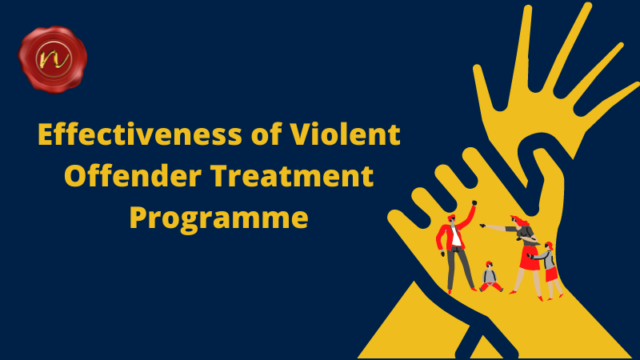 The prevalence of violence within the Mentally Disordered Offenders (MDO) population is significantly higher than other types of offending (Braham, Jones & Hollin, 2008). In 2003, 36% of forensic psychiatric units’ population was either convicted or accused of acts of violence (Lily & Howard, 2004). 72.3% of the population within the high secure psychiatric services in the U.K. were committed to a violent offense (Braham, Jones & Hollin, 2008). Clinicians often debate about what constitutes appropriate treatment for MDOs (Muller-Isberner & Hodgins, 2000). They present with two categories of treatment needs: one being needs originating due to the diagnosis of the mental illness and the second needs are categorized as criminogenic needs (Andrews & Bonta, 1998). ​Although there is an overlap in the criminogenic needs of violent MDOs and non-mentally disordered violent offenders (Bonta, Law, & Hanson, 1998), the treatment for MDOs significantly differs as it is characterized by medication. Research suggests that medication is helpful in managing symptoms of mental illness associated with violence, however many scholars support the need for a psychological emphasis to treatment suggesting that not all MDOs respond to neuroleptic medication (Heilbrun & Griffin, 1999).

Many evidence-based interventions for reducing recidivism have been guided by the risk-need model (Andrews & Bonta, 2002). These offending behavior programs are often categorized under “What works” (McGuire, 2001). These treatment programs have shown significant positive results (Losel, 2001). However, psychological treatment to violent offenders is limited to a few case studies (Braham, Jones & Hollin, 2008). There are studies evaluating violent offender treatment programs, but there is a little knowledge base for treating violent MDOs. Howells (1996) suggests that violent offenders are of less interest in the professional realm when compared to sex offenders. This lack of interest has further constricted the development of effective treatment specific to violence despite the high prevalence rates.

The violent offender treatment program (VOTP) was developed to specially cater to male mentally disordered offenders (MDO) in high-security hospitals who exhibit persistent violent behavior and aggression (Braham, et al., 2008). VOTP is underpinned by cognitive-behavioral treatment (CBT) (Howden, Midgley & Hargate, 2017). VOTP takes into consideration specifically three areas: symptom-related violence, violent behavior as a result of emotional reaction and violence not due to symptomatology, thereby adhering to the complexity of MDOs (Braham et al., 2008). ​VOTP accounts for the varying features of mental illness and cognitive limitations that can cause hindrance in the treatment process through the adaptation of the delivery of VOTP.

Braham and colleagues (2008) piloted VOTP for the preliminary examination of the effectiveness of the program within a high-security setting with clients that have a history of poor treatment engagement, treatment failure, and low commitment to the treatment. The results showed positive outcomes and the post-treatment scores of the participants (n=10) on the psychometric test (Violence Risk Scale, VRS) indicated a transition from high to medium risk. The improvements noted in the clinical rating form were supported when within one year of completion of VOTP. Seven of the ten participants were transferred to low secure units, while others were moved to less secure units of the hospital. Research links the level of security at which patients are held in a forensic setting and the rating of violence risk attributed to them using HCR-20 (Muller-Isberner et al., 2007). The data shows a positive direction of change pre and post-treatment. Psychometric tests showed reduced impulsivity, criminal thinking, and anger. However, the pilot data are of limited scope in terms of the sample size being small, assessment modality, and absence of a follow-up. Furthermore, the study was conducted by the developers of the treatment program and therefore could be biased. The small sample size and absence of a control group limited the study’s generalisability and made for less reliable results. It would be useful if future studies included a control group in order to make comparisons and better evaluate the effectiveness of VOTP, but the pilot study did set a good basis for the efficacy of the program for reducing violent reoffending in the MDOs population. Similarly, VOTP was piloted within the medium secure unit (MSU) for adult male MDOs to check its effectiveness in MSU (Howden, Midgley & Hargate, 2018). But few changes were made to the VOTP, for example, some of the content of the module was changed after discussing it with the program developers. Another important change involved was in the delivery method of the program. The number of sessions were reduced to 84 hours of treatment over a seven-month period from 220 hours of treatment expanding over a 14-month period (Braham, Jones & Hollin, 2008). Other research argues that treatment intensity should be equivalent to the patient’s risk for the effectiveness of the treatment (Andrew & Bonta, 2007). The adaptation of the seven-month program seemed appropriate given the patients’ stay and overall treatment pathway within MSU is 1.9 years when opposed to average stay in a high secure unit is eight years (Howden, Midgley & Hargate,2018). The integrity of the program was maintained by keeping the treatment aims and objectives of the adapted VOTP the same as the original program.

The results of the study suggest that the treatment had shown improvements since 76 percent of the participants were moved to a less secure area of the hospital, and 20 percent of participants were discharged to a low secure unit within a year following the completion of the treatment program. Participants showed significant improvement in the measure ​the GAS-V (15 out of 25 participants improved), followed by the VRS (13 of 25 participants showed clinically significant change). However, their risk of violence remained unchanged when measured using HCR-20. These results did not comply with the expectations of the researchers as they expected all three measures to have consistent results and to show a more reduced risk to violence. These findings could possibly be understood by previous literature suggesting that MDOs are high-risk offenders and treatment programs are likely to reduce harm and help with rehabilitation (Wong et al., 2012) as opposed to a decrease in risk of recidivism. The measures VRS and GAS-V are more suited for measuring the effect of VOTP on risk to violence than HCR-20. It can also be argued that violence is a complex concept and risk to violence assessments can be inaccurate (​Dolan and Doyle, 2000). The measures used to assess risk might not be able to detect effective aspects of the CBT program. Therefore, it is vital for practitioners to understand the limitations of risk assessment measures and express their reasoning behind their scoring through formulation.

Although, there was not a significant reduction in violence risk, but rather there was one positive outcome: all participants completed the program. This is important since previous studies have reported attrition on offender programs and this might have impacted the group improvements and reconviction rates. Furthermore, the study had other limitations which made its results difficult to be generalizable. The sample size was small, thus limiting the conclusions about the effectiveness of VOTP to reduce violent re-offending in MDOs within MSUs. However, the study does provide convincing acceptability of the program considering the lack of dropouts and initial evidence of improved outcomes for male MDOs in certain areas of the treatment. In addition, most of the participants were moved to a less secure ward within one year of the treatment completion. This shows the effectiveness of the treatment program.

In conclusion, there is a limited empirical base from which conclusions can be drawn about the effectiveness of the treatment for violent offenders (Jolliffe and Farrington, 2007). The empirical evaluation of violent offender programs for MDOs are at an early stage and the evidence base is inconsistent and inconclusive, therefore it is vital to conduct research and evaluation to be conducted in the area of violent offender treatment (Day & Doyle,2010). Future studies should pay close attention to developing a controlled methodology to determine how much change can be attributed to the program itself. Also, to ensure robust evidence of behavior change following treatment, it would be important to consider re-offending and readmission rates of those involved in treatment. However, studies reported to evaluate offender treatment programs that only focused on re-offending rates often underestimated the “clinical” change which has serious implications (Young et al., 2010). Therefore, both methods should be used to understand the complex area of violence, risk, and recidivism. Further research should also consider including interviews to explore participants, characteristics, and other factors that might influence the behavior change. An exploration of the clinical and risk characteristics of the MDO population would be beneficial to improve the effectiveness of the Violent offender treatment program.