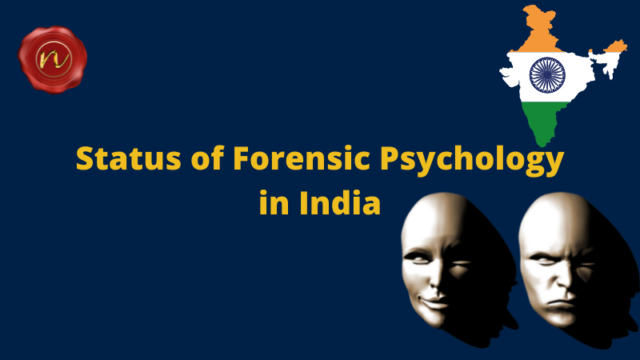 In a world of increasing crime, personnel of the Criminal Justice System are working nonstop to reduce the same. Are they successful in creating a safer and secure society to live in? Is punishing the criminal best way to reduce crime rates in the world?

The answer to such questions lies in the study of Forensic Psychology, otherwise known as Criminal Psychology. Similar to any other field of forensic science, forensic psychology involves applying the principles of psychology in legal issues. Psychology and law are subjects that have existed since time immemorial. Yet, the new field of forensic psychology has many hurdles to gain prominence. It still stands to be an emerging field in India, while upholding a prominent role in the criminal justice system of the UK and the USA.

When a person listens to the word forensic psychology, the process of ‘lie detection’ pops up in their minds. But in reality, criminal psychology does not limit to polygraphing. A working professional forensic psychologist has many roles to play, including predicting criminal behavior, assessing the mental health of victims, suspects and witnesses; testifying as an expert witness in the court of law, understanding the working of criminal minds (criminal profiling), gauging eyewitness testimony, and brain mapping (new age lie detection). In required cases, they are involved in the rehabilitation of perpetrators and counseling of victims.

History of Forensic Psychology in India

An American Psychologist, James McKeen Cattell, was one of the first psychologists to work on testimony in the year 1893 at Columbia University. His research was conducted after the establishment of a forensic psychology lab in Germany (1879) by Wilhelm Wundt, the father of Psychology. The level of inaccuracies and self-confidence levels in individuals seen by Cattell led to the emergence of a plethora of researches on eyewitness testimony alone. Intelligence testing developed by Alfred Binet has a very essential role in the development of forensic psychology. In 1901, William Stern took Cattell’s research design to an advance level by pairing up with a criminologist and made a variety of conclusions including suggestive questions could compromise the accuracy of eyewitness reports; major dissimilarities between adult and child eyewitnesses and the happenings that ensue between the new event and its recollection can intensely affect memory. In 1917, other than sowing the seeds of the polygraph, mental tests to screen police officers were used by Lewis Terman. The initiation of testifying in courts was started during the 1940s and 1950s.

In India, the first lie detection lab was established in the Central Forensic Science Laboratory (CFSL) under the Central Bureau of Investigation (CBI) in the year 1968. During the development of the roots of lie detection in India, the procedure was believed to be based on trial and error. Another procedure of Narco-analysis which can be done under the supervision of courts was first done by the renowned forensic psychologist of India, Dr. S L Vaya in 1989. Dr. S L Vaya has also laid the foundation by highlighting the need and importance to take the consent of participants undergoing narco-analysis. Today, the procedure of narco-analysis is done in the settings of a hospital under the presence of a doctor, a nurse, and a psychiatrist. Regardless of taking consent before conducting the tests of lie detection, narco-analysis, or brain mapping, the Supreme Court of India debates that these procedures invade the fundamental rights of an individual. 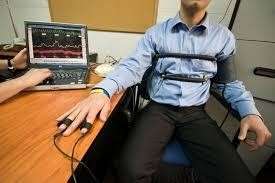 Lewis Terman was the psychologist to explain the how physiological changes of the body can be observed when a person deceit. Polygraph, also known as the lie detection test records four physiological functions of the body to tell whether a person is speaking the truth or not. The basic principle of the polygraph is that there is the stimulation of the nervous system when a person lies, which could be recorded in the changes in physiological parameters.

The four physiological parameters recorded in lie detection are:

Initially the consent of the individual is taken after explaining the entire procedure of the examination. The questions are in the format of ‘yes’ and ‘no’, where the subject has to respond by only those two words. The setting of the examination is a closed room with no windows and in the presence of only the examiner. The person is seated on a chair and is wired with the equipment required. Blood pressure and pulse rate are measured using arm cuffs. Respiration is recorded by a best placed around the chest. An electrode attached to the tip of the index finger reads the galvanic skin responses. The result is presented graphically. A maximum of 10 questions containing relevant, irrelevant, and control questions are asked in one setting, maintaining a gap of 20-25 seconds between each question.

The drawback of polygraph: mentally unstable persons, people with respiratory or cardiovascular disorder, innocent people with slight nervousness could be declared as being untruthful.

Polygraph is unacceptable in the court of law. It can only be used as corroborative evidence or to direct the investigation.

In this procedure of detecting deception, after taking prior consent from the participant, he is injected with a light anesthetic drug and a mental examination is conducted. When a person is close to the state of being unconscious, his mental capacity remains at lower levels which render him incapable to being dishonest. The procedure is usually done in a hospital in the presence of a doctor, nurse and psychiatrist. Scopolamine hydrobromide, Sodium Secnol, Benzodiazepines, Thiopentone sodium or Sodium Pentothal, and Sodium Amytal are the general drugs used for narco-analysis.

The disadvantages of this test is that few individuals have the capability to maintain their mental competence even under the influence of drugs, and causing side effects if the wrong dosage is induced. In some instances, the wrong dose can cause coma or death to the person.

The Supreme court of India has raised a concern of the examination invading the fundamental rights of the citizens. The test also has many ethical concerns.

Dr. Lawrence A. Farwell developed brain-fingerprinting. It is also known as Electro-encephalography (EEG).  It is a psychophysiological evaluation that can be observed by recorded the brain responses to certain stimuli such as pictures, words or phrases. The examination is performed in a closed room where only the individual undergoing the test in present in front of a computer screen. Equipment to read the brain signals of the person is placed to the head of the person. It measures the P-300 wave of the brain, called the MERMER (electrical) response, which is a characteristic of information processing accompanying recognition of stimuli. Probes, irrelevant and target images, phrases, or words are presented on the computer screen. Probes are linked to the crime. If the brain recognizes the stimulus the P300 response is activated and recorded. If the person responds to a probe stimulus, it concluded his involvement in the crime.

Responsibilities of a Forensic Psychologist

They assess the psychological functioning of the individual to provide a clinical judgment of their mental competence. This will help criminal justice personnel to frame the right questions. They also check whether the person is mentally ill. They also determine whether the individual is fit to stand trial. Apart from this, they conduct psychotherapy sessions, which could also reveal incidents of child abuse.

The development of offender psychological profile can help criminal investigators in solving crimes. It helps in creating effective interrogation techniques.

In a few cases, they have to provide expert testimony in court expressing why the crime was committed. The judgment of the case is mainly influenced by the testimony given by the psychologist.

They individually conduct their own studies to analyze the working of criminal minds and also to develop advanced methods to be used in the criminal justice system.

Evaluating and treating the victims and witnesses of different crimes is equally important. The level of victimization they undergo has to be understood to provide the appropriate treatment.

While the prisoning of offenders is the common way of punishing convicts, there are negative sides to it. Some perpetrators will become aggressive when undergoing punishment such as imprisonment. In viewing such offenders, it becomes important to understand the psychology of the culprit to provide a more rehabilitative experience to reduce the occurrence of crimes in the future by the same offender. Perpetrators who undergo mental health issues in prisons should also be considered for psychotherapy sessions. The lack of forensic psychologists in India has to lead to the absence of such reforming methods.

Scope of Forensic Psychologists in India

In the current setting of India, the evidence provided by forensic psychology is just corroboratory in nature. Though the need is vast for the criminal justice system, we see a lack in this area academically and professionally.  Recently our Minister of Home Affairs, Amit Shah called for setting up of National Police University and Forensic Science University, with affiliated colleges in every state. So, a person who is interested and looking for a career in criminal psychology can find a number of good options for their career. It is hence suggested for an increase in the number of working professionals and research studies in this subject.