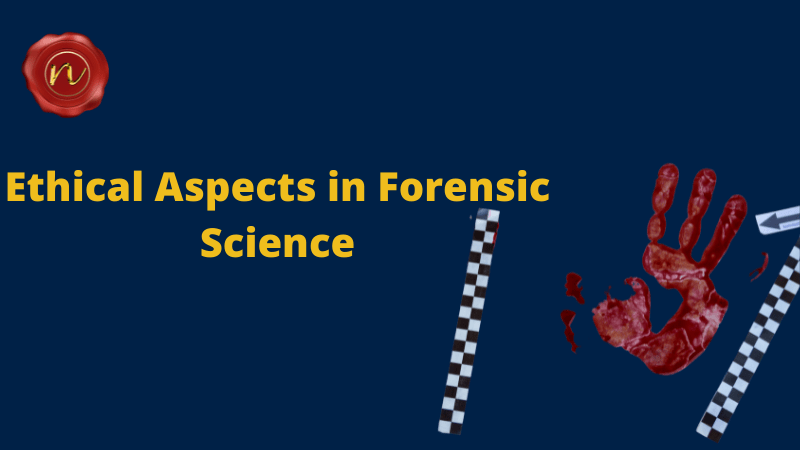 Forensic science is the branch dealing with the application of medicine to legal procedures generally dealing with criminal investigations. Ethics is a concerning aspect in every field which provides the moral guidelines for the professionals to follow. It has emphasized its presence in each and every field for the systematic, considerate workflow in every branch. A proper code of conduct for the forensic experts will allow them to be free from biases, decide within ethical dilemmas, and follow for the right. Ethics comes into the picture right from the examination of the victim, collecting evidence, analyzing the evidence, and giving an unbiased result. Ethics is not only stuck with forensic procedures but also observed between forensic experts and organizations.

Usually, the need for ethical code comes from the examination for the formulation of a final opinion on a case. Michael. Saks (Michael.J.Saks, 1989) reported that the three main categories of the ethical problems were the competency, individual misbehavior, and problems of practicing in an adversary system. These problems can lead to biases and controversies in the end reports. Some situations where ethics are important is been discussed below.

Prime importance for the evidence collection must be given to the victim. If the victim is not dead, the person has to be given the time for relaxation before the evidence collection period. His/her mental state has to be considered above the documentation on purpose. If the victim is dead, the cadaver has to be dealt with at most care and respect equal to that to be given to a person that our local law enforcers fail to oblige to. The dead body has to be covered properly and has to be transported to the nearby hospital at the earliest. Necessary photographs with proper standard operating procedures have to be taken before moving the dead body.

Evidence collection is the next important part of the criminal investigation. If the victim is alive, the evidence that has to be collected from the victim should be with his/her consent. He/she have to be told about the procedure and should sign an informed consent form. If it’s a case of sexual assault or child abuse, the social stigma the victim needs to face should be kept at higher concern. If the victim is a minor, the consent has to be taken from the parents or if he/she is major from himself. The questions that affect the emotional state of the victim need to be avoided and should give them the time to relax. Ethics not only talks about the rules and regulations for the proper working of a system, but it also considers the moral principles they should consider during the procedures. These informed consents also come up for other procedures like the urine

screening for drug testing and wherever the intimate body samples are needed as part of the investigation.

Ethics prevent or give directions when challenging situations arise while the investigation is on progress. Falsifying the documents, manipulating the evidence to direct on someone else, or political or high-power pressure to rescue the accused are some of the major problems faced by the forensic experts. (Peter.D.Barnett & Saks, 2003)

Ethics is always there in the picture from the start to the end of the investigation, now considering the ethics in providing final opinion and testimonies in courts. The final opinion should not be influenced by individual priorities, preferences. The truth should not be misinterpreted intentionally or made flexible according to the wish. The expert must be able to explain each line of his report with sufficient explanation in the court. If the court suspects the report’s credibility, the judge has the authority to order for another institution to provide a re-evaluative for the same.

Wherever there are humans involved, ethics is irreplaceable. Different stages of criminal investigations involved considerate importance for a code of conduct to reveal the truth in a systematic way. It helps the chain of custody to be used effectively. Ethical code governs each step to unmask the truth and helps in reconstruction. It increases the reliability and credibility of the final opinion by an expert witness. The quality of the final opinion is also maintained with the help of ethical aspects.