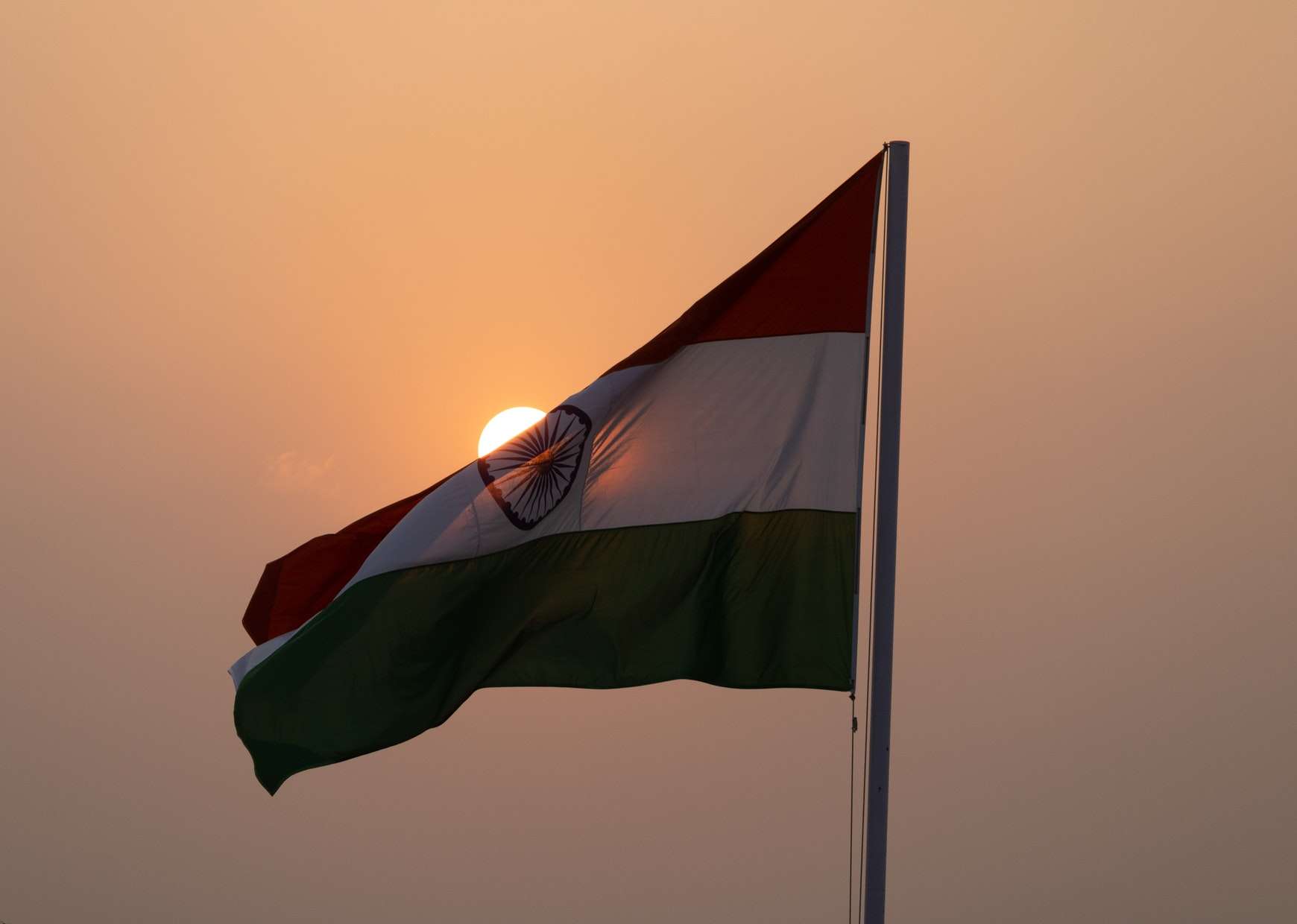 Forensic Science plays a pivotal role in solving criminal, civic, and regulatory matters. It is one of the most important aspects of criminal investigation and thus maintains the peace and law in society. Forensic Science deals with biological, physical, chemical, and digital evidence. By application of pertinent knowledge of physics, chemistry, biology, and information technology, the forensic scientist investigates, analyses, and finally reports the result to the court system to bestow justice [1]. Forensic science can be used as a tool for the development of the nation as the criminal’s mind threatens the community. Emerging fields in forensic science like neuropsychology and building the DNA database could help the nation to overcome serious crimes like terrorism, rapes, murders, burglary, and extortion cases.

Forensic Science aims to protect the innocent while doing so, many challenges are faced. One challenge is faced by crime labs, which are considered as the strongest link between technology and criminal justice. Forensic Science Laboratories analyses the evidence provided by the police authorities. In India, Central Forensic Science Laboratories and State Forensic Science Laboratories are working under administrative control. While the Union Territory laboratories are under the respective home department or law enforcement authorities. In high-profile cases or for a particular case, forensic scientists are pressurized for the reports, which leads to the use of inappropriate methodology and results in faulty analysis and reports. This may generate a false report and suspected may get expelled from the accused list. Another problem gains attention to the way investigating authorities handle the crime scene. It is observed most of the time, the police personnel directly enter the scene and this may destroy or damage the valuable evidence. Evidently, it is because of a lack of knowledge and skill. Hence, collection, handling, and preservation of evidence are bargained. Besides this, there should be proper maintenance of the chain of custody, i.e. providing proper information to every person who is investigating and handling evidence. Systemic documentation is necessary for establishing the credibility of scientific evidence. Unfortunately, the judicial system and investigating officers do not give importance to the chain of custody. Various other challenges faced by forensic science are listed below:

Every scientific evidence has a probative value which makes the evidence individual. In the courtroom, it is important to present evidence along with probabilistic calculations. Unfortunately, in courtrooms, the reports are presented only with the matching of samples with evidence. It is necessary to hand over the forensic analysis report in a proper manner to the judicial system, as the strength and weight of evidence depend on probative calculations.

Absence of well-defined code of ethics:

The forensic procedures should follow a stringent protocol that can overcome bias. In the United States, the National Institute of Forensic Science (NIFS) has proposed well-defined ethics for forensic disciplines and communities which would subsume this code as a professional code of ethics.

Absence of standard and validated procedures for accuracy:

There is an absence of quantitative criteria and standardized procedures [2]. There is a need to develop a technique that would minimize human error and automate the existing technology where appropriate. For example, in courtrooms, forensic experts are always questioned on the procedure they follow to generate the report. It is because there is an absence of a standard modus operandi. There should be a validated protocol of procedures for all the investigating agencies. Validation of procedure and equipment is necessary to counter the challenge.

Lack of Forensic Education and Practice:

To overcome this challenge, the promotion of basic knowledge and training should be employed in a form of various outreach programs that would promote law practitioners, judges, police personnel, forensic experts, and research scholars for new ideas and development [2].

In the case of digital forensics, digital evidence is much more sensitive than physical evidence but has much value. They can be easily destroyed, therefore need proper handling by skilled personnel. As mentioned above challenges, digital forensics faces different problems as technology steps towards development each day. Digital Forensic investigation encounters various problems at the time of practical implementation. Such problems are categorized as technical, legal, and resource problems. Furthermore, these categorized challenges are sub-classified as mentioned in Table 1. 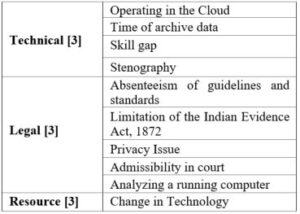 Forensic Science is proved as a beneficial tool for the development of the nation. It is an interdisciplinary field that assists justice courtrooms by a new approach coupled with chemical and fundamental principles. Nowadays, forensic science application is not only limited to investigating crime, rather it is used for international accidents, national security and intelligence, and ensuring safety for public health. In 2001, the anthrax attack was investigated by forensic techniques. However, terrorist attacks are always accompanied by new chemical and biological agents, thus forensic techniques are useful in such national-level crimes [2].

In July 1995, the Srebrenica massacre resulted in a loss of about 2,00,000 persons, out of which nearly 25,000 were missing. The bodies and body parts were mutilated, and identification was impossible. Within a few years, thousands of body bags were recovered. DNA testing along with forensic techniques proved to be successful in identification and many families were handover the bodies and body parts. Yugoslavia developed a system of International Commission of Missing Persons and with the help of DNA testing, missing persons are identified [4].

As criminal mysteries are solved, the criminal profiles are added in the criminal database which in the future assists the Law enforcement authorities to suspect the criminal. There is a need to develop a DNA database of each individual in a nation which might aid to ease of investigation. With the help of the DNA database, the missing persons can be identified easily.

A forensic scientist always sticks to research work as crimes are developed in every aspect. One of the examples is the confirmation of drowning deaths. Regional Forensic Science Laboratory Dharmshala (Himachal Pradesh) has developed a novel method of identifying whether the drowning was either antemortem or post-mortem [5]. This method is less time-consuming and cost-effective as compared to the old ones. This is a reliable method for solving drowning cases effortlessly and efficiently. The research in developing the latent fingerprint on the fired bullet casing is another example of a step towards development. This might solve many gun cases with ease. Development in the field of forensic science is a part of developing nations as it strengthens the scientific foundation of science which might prove beneficial to public concern.

Another prospect is Public Safety and Health. For decades, forensic science has been playing a vital role in ensuring public health, either from a biological attack or by research work. The COVID-19 pandemic has laid the world down to its knees. In such an emergency situation, forensic scientists are working together with health care professionals to assist them and ensure safety in society. In India, 52 laboratories are assigned for testing the COVID-19 samples while 57 labs are busy in collecting the samples for testing to enhance the capacity to detect disease. Illinois State Police (ISP) with forensic scientists are working together during a pandemic. Forensic experts and scientists are assigned to work with the DNA research department in Carbondale, Springfield, and Chicago [6]. This development can be used as a tool to strengthen the weakness and loopholes in the nation. Besides this, digital forensics ensures the safety and privacy of the public. As criminals are using digital methods for committing crimes, digital forensic helps to solve these types of developing crimes. Cybersecurity and digital forensics work together to ensure the privacy and safety of society in the modern technological era. They work with various law enforcement agencies to locate, identify, and investigate crimes at national and international levels.

Forensic Science is the application of science and technology in law and legal disputes. The crimes related to terrorism, murders, extortion, fraud, and money laundering can be solved only by using advanced forensic science techniques. The crimes all being sophisticated, that without forensic techniques the criminal cannot be proven guilty. However, many challenges as few mentioned above are faced by forensic experts which might be at the laboratory, organizational and political levels. These challenges should be resolved in order to bring development in the field of forensic science which will eventually bring the development of the nation.

1 thought on “Forensic Science as a Tool for National Development”